The Sun Seeker iOS app includes a map view which allows users to see an individual property with solar directions and hours overlaid. This is a valuable way of visually assessing a property’s solar exposure. However, to be especially useful, it does require good-quality (i.e. high resolution) satellite imagery to be available.

In older iOS versions Apple used Google as a maps provider via MapKit, but that changed with iOS6 when Apple introduced it’s own maps, and the unfortunate consequence was that many users of Sun Seeker found that after upgrading to iOS6, the quality of satellite images degraded substantially, as evidenced by numerous customer complaints.

However Google saved the day, eventually, by releasing their own Google Maps SDK for iOS, which allowed me to switch back to showing Google satellite imagery in Sun Seeker, and thankfully the complaints dried up.

Fast forward a few more years and Apple has put a lot of effort into improving their map products. In fact, using Apple’s own Maps app, the satellite image resolution is, in some cases, better than Google’s. However, the odd thing is that this higher resolution imagery appears to be available only in Apple’s own Maps app – and apps that use MapKit still have much lower quality imagery.

The following images from an iPhone 6S running iOS9 illustrate this clearly. They are both for the same location (an apartment block on Sydney’s lower north shore) zoomed in to maximum possible amount. 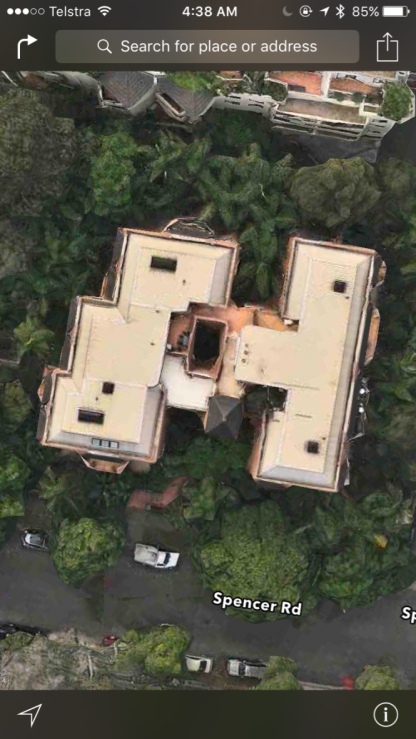 Note – The imagery used here is identical to that found in Apple’s OSX Maps app and in Apple’s MapKit on OSX respectively i.e. the product offering is consistent between iOS and OSX.

So oddly, Apple is offering far lower satellite image quality in MapKit than they offer in their own apps.

In comparison, the following images, at the same location, and also zoomed in to the maximum allowed level, show the situation with Google’s imaging.

The main conclusions are:

This is unfortunate for my plans to build an OSX version of the Sun Seeker app, in particular because Google does not allow it’s imagery to be used for free by apps on any platforms other than iOS and Android. So my options appear to be:

Have I missed other options? What would you do in this situation?

5 thoughts on “Comparing Satellite Image Providers in iOS and OSX”