This is the latest installment tracking the progress of the Oz Weather iPhone app in the iTunes app store. (Part 4 installment here.)

The following graph shows a complete history of more than 6 months of daily sales records, since launch on Nov 1st 2008. 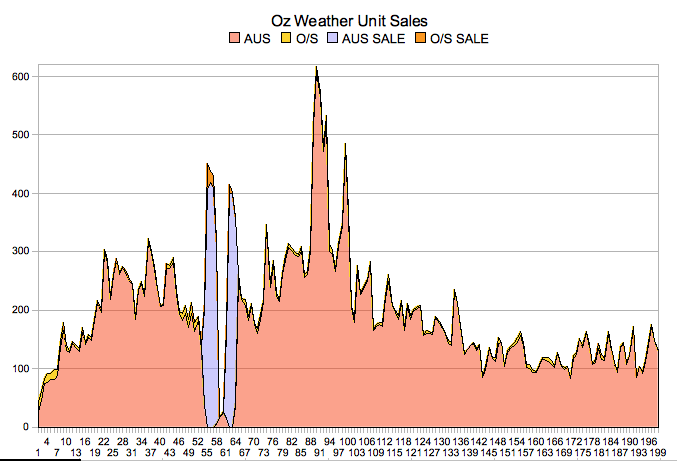 It is apparent that, although sales have declined quite a lot from their peak in early Feb 2008, they now appear to have leveled out over the past two months at an average of around 125 sales per day.

The app ranking (amongst all paid apps in the Australian iTunes store), however, is a little more volatile.

If you look at the long term trend this might be interpreted as showing a ongoing decline. However, if just the last two months are taken in isolation, then it is also possible to interpret it as having leveled off at around the #20 ranking mark, albeit with greater volatility – and this seems to be given some support from the actual sales numbers. In fact greater volatility is always to be expected at a lower ranking, due to a crowding of other apps with similar sales levels, such that only small variations in sales numbers can make much larger changes to their relative rankings.

Also of significant interest may be the fact that Apple has actively included Oz Weather in their advertising and promotions. These have included: 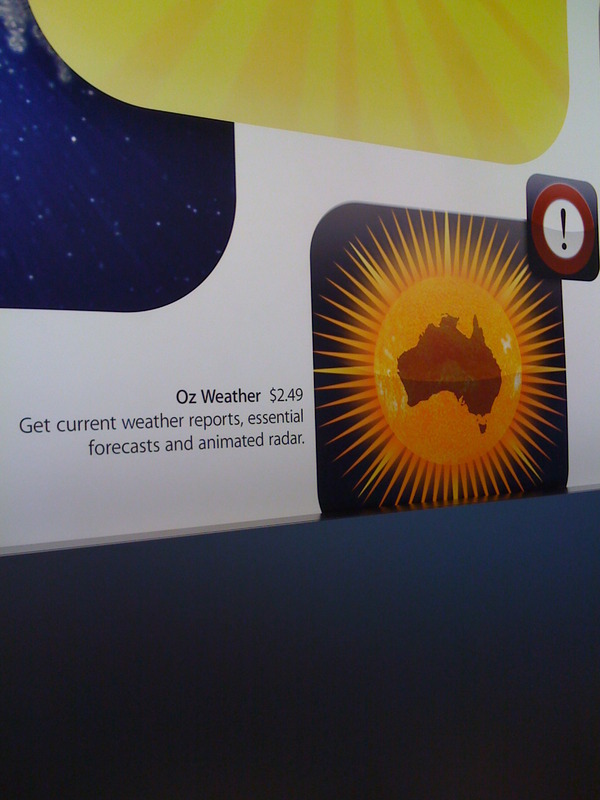 Some of these promotions have been ongoing for a couple of months (Apple Store), and others are more sporadic (TV and newspapers ads). However, I have been unable to spot any significant correlation between the timing of these promotions and changes to app sales figures. Given that sales levels appear to have stabilised, if there is any effect from these promotions, it suggests that the effect may been to prevent a further falloff in sales, rather than actually increasing them.

Of course there is still the possibility of a seasonal effect that I referred to in an earlier post, and perhaps when more severe winter weather sets in sales levels could increase again. In fact the sales of other weather apps appear to have suffered a similar decline in rankings to Oz Weather,which would be in line with this hypothesis, but on the other hand it may also simply be reflecting the huge increase in the number of apps available (four times more than when Oz Weather launched), or even a market saturation of weather apps. If estimates of the number of iPhones in Australia are accurate, then Oz Weather is already installed on 10% of them. It might be hard to get a better market penetration than that, for a paid app!

As usual, I’ll report back again with further information when time permits.

As a complementary service to its iPhone app (link above), Oz Weather is now providing weather forecasts and observations via twitter, with official data sourced from the Australian Bureau of Meteorology.

The latest forecast along with any current weather warnings is tweeted four times a day – morning, noon, late afternoon and late evening. 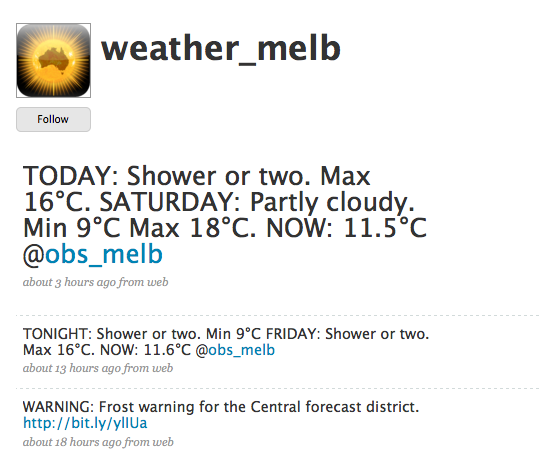 Additionally, it is possible to view the latest hourly weather observations by clicking on the twitter link at the end of each forecast (@obs_melb for Melbourne, for example). Or if you are a keen weather follower, you can also choose to follow this stream and automatically get the updates every hour as part of your own twitter stream. 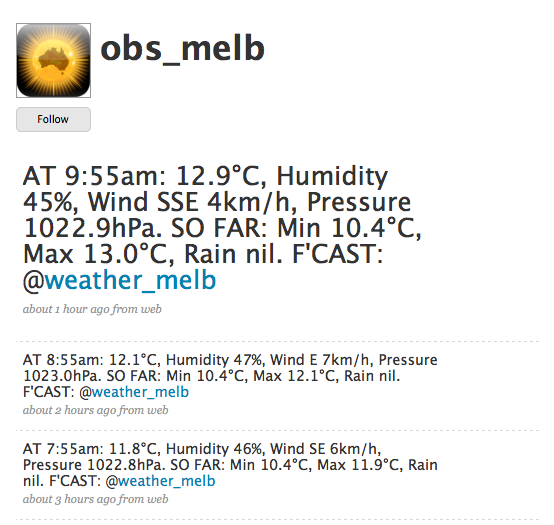 Due to the nature of twitter, traditional methods of delivering weather forecasts don’t necessarily work well on it, but dedicated streams on a per-city basis is one approach that does seem to have some promise. Twitter weather is a fairly new phenomenon, but a number of players are already experimenting with it. No doubt we will see some interesting and useful developments emerging as a result.