You may already have heard from some other sources that iPhone app sales were very strong over the Christmas period, possibly enhanced by many new iPod Touch devices being delivered from Santa’s sleigh.

I can certainly confirm that it was a strong sales period for Oz Weather – although the picture is complicated by the fact that I temporarily dropped the price for the Christmas period. Here are the daily sales figures to date – from 1st November to 29th December. 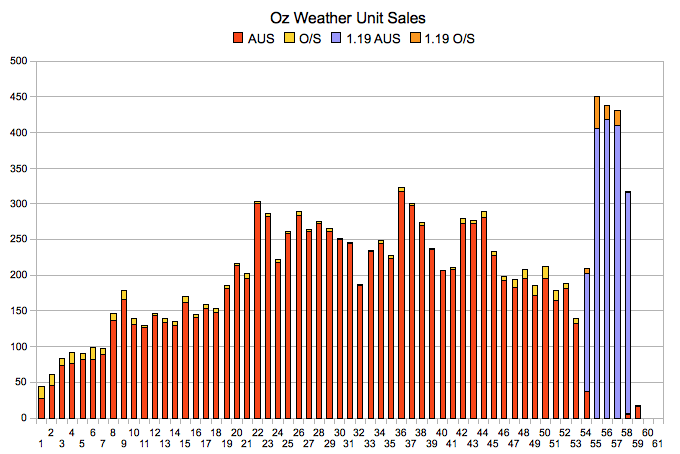 Did people suddenly stop wanting to buy Oz Weather because the price discount had ended? Did Oz Weather suddenly become unpopular? Did a competitor suddenly release a much better app?

The answer to all these question is no. Many people are still wanting to buy Oz Weather, but are unable to do so, due to problems in the app store. On the 29th and 30th December I received 7 emails from potential customers wanting to know why they couldn’t purchase it. This is very likely the tip of the iceberg. The vast majority of customers simply wouldn’t bother trying to contact the app publisher when they receive a message like the following (sent to me by a customer).

So what is going on here, Apple? I have tried contacting Apple support, and so far have only managed to get an automated reply saying:

Please plan for a delayed response time from the iTunes Connect Support team from December 23rd through January 5th as we will be short-staffed over the holiday break.

It is apparent that the app store problems go beyond just the Oz Weather app. The Australian store paid app rankings were “stuck” for several days, and showed widely different results depending on exactly where you look at the rankings.

I am not generally one to jump on the hindsight bandwagon – but in this case I am very tempted to say to Apple that “you should have realised that Christmas was going to be your busiest period, and employed extra staff instead of sending them all on vacation”. Now I am in a position where, due to this Apple glitch, I am probably losing several hundred dollars per day in sales, and my app ranking has artificially fallen from #2 to way off the radar – and I can’t find any way to get any response from Apple.

My questions to other app developers

In the absence of any way to get immediate support from Apple, I’m really hoping that someone who reads this blog can provide some useful feedback!
Late Addition (31 Dec): The following link to a PCWorld article which indicates that there have also been other app store/iTunes problems this Xmas.
Late Addition (1 Jan): I am not alone. The app store IS broken. See the comment from VPool.

Oz Weather has now been selling for long enough, and over a large enough range of iTunes app store rankings to enable me to get a good handle on what level of sales you need to achieve a particular ranking – or conversely, what ranking you would achieve from a given level of sales. 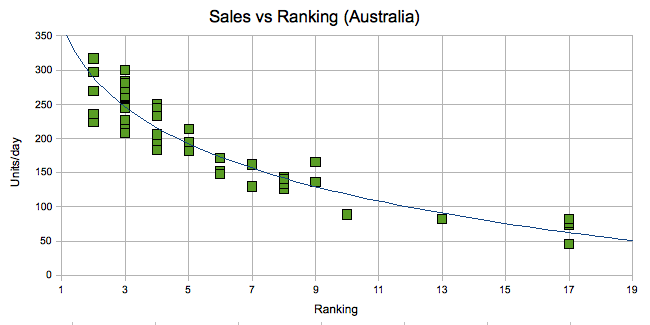 Of course this app is selling worldwide, and this is just the Australian component of sales. I’m not sure of its rankings in the US or elsewhere, but one can probably reasonably assume that it might be selling, say,  20 30 times more worldwide than it sells in Australia alone. So taking this one step further, one arrives at a rough estimate of AUD$4500 (US$3000) per day worldwide.

Daniel Bradby (see comments) has provided an excellent link showing a similar graph for worldwide app sales – although supported by much sparser data. It appears to show that worldwide app sales are around 30 times more than those in Australia, rather than my initial estimate of 20 times. I have updated this article accordingly.

NB – There is now a more recent article with updated data and more detailed estimates of world-wide sales/rankings ratios.

An update to Oz Weather – v1.2 – has just been approved by Apple and released to the app store.

This update provides many new options to cater for special interests and patterns of usage – for example nautical users can now have windspeeds in knots, and observation mavens (like myself) can now get the app to open showing the observations page first. Fortunately this has all been possible without interfering with the simple and clear user interface. 🙂

This update was submitted on 11th December, so approval took 5 days (including a weekend).

To make changes to these options go to your iPhone’s Home Page and select the Settings icon. Then scroll down until you find the entry for “OzWeather“. 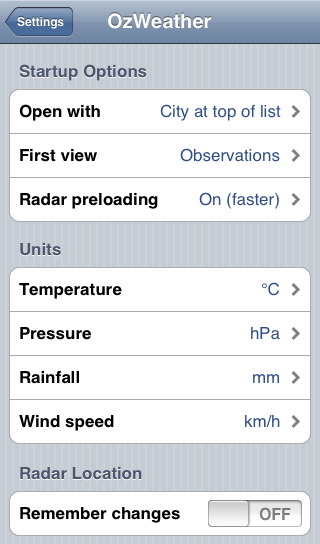 NB – This option only affects the first city weather view during an application session. For any subsequent cities you choose, the application remembers which type of view you  last used.

NB – A typical set of radar images for a city ranges from about 10kB to 40kB depending on how much rain activity is occurring.

NB – Sailors and others with nautical interests should choose knots for windspeed.

NB – This option does not affect the radar range – only the radar location. Any changes you make to radar range are remembered for next time you view the radar for the same city.

In an earlier post I ranked Australian cities according to their degree of weather obsession. This was based on data from the original Oz Weather web application, which was receiving a few hundreds hits per day.

I am now in a position to provide a second opinion – this time based on a much greater volume of data from the Oz Weather native application, which currently receives around 10 to 15,000 queries per day. And again, Canberra is the clear winner.

The following list shows the ratio of unique weather queries to Oz Weather per head of population, indexed on Canberra’s data, for the last month (older web app rankings in parentheses).

The biggest single change is for Brisbane (up from 25% lowest ranked to 72% equal 2nd ranked). This probably reflects some of the recent spectacular weather they have had ie.  several outbreaks of severe storms.

The other overall change is the elevation of tropical and semi-tropical cities to the upper end of ranking at the expense of the more temperate cities. This may reflect that the weather in the more tropical cities is relatively benign in winter, but more prone to extreme conditions in summer, whereas the opposite tends to be more true of more temperate locations.

Given that local weather events and seasonal effects seem to have such an impact, it will probably require a much longer period of time of analysis to even these out – perhaps a full year. However, given that Canberra has been a clear leader in both analyses so far, it seem safe to allow it to maintain its status of most-weather obsessed city in Australia.

Following on from my initial report after the first two weeks of sales, we’ve now had one full month of sales. Here are the daily sales for the month of November 2008. 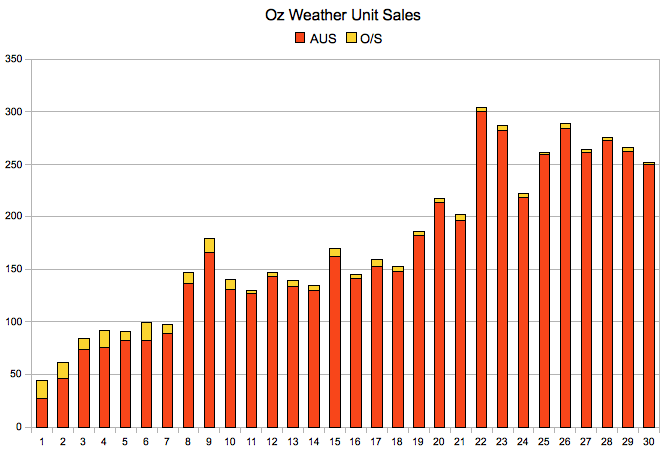 Daily unit sales jumped substantially around 22nd Nov, which coincided with an outbreak of extreme storms on parts of Australia’s east coast. There were a lot of great radar images to look at! Of course this also increased app usage and demand on the server, as a result of which I had to upgrade the server capacity. I guess that is one of the problems of success.

A “weather query” is one request by the app for one city’s weather data. Although a typical request requires only several kB of data in itself, the 94kB is explained by the fact that radar images are downloaded simultaneously to the weather request to ensure that the image is likely already there should the user actually want to look at it.

This seems to be contrary to other reports I had heard which indicated that the typical upgrade ratio for an iPhone app was low. Here are two reasons to explain why this case might be different.

Those of you who read the comments on my last blog may have seen an entry from one of the Pocket Weather developers. He very graciously posted their own sales trends, which so far look very different from my own, despite the closely aligned basic purpose and functionality of our apps. I also note that Pocket Weather will soon have an update to their app, and it will be very interesting for us both to see how that affects our relative sales levels. Stay tuned!