At the time of writing, Oz Weather is listed as 7th in the list of top paid apps in the Australian iTunes store.

So apart from that warm, fuzzy feeling you get when you see your the fruits of your labor actually being bought and used and appreciated, just what does this mean? In particular I mean in terms of sales and revenue. Is that level of success enough for someone to retire on? Or is it just a folk legend that you can get rich quick if you can just find someone to help you build your own iPhone app?

Its not the norm to publish your own app’s sales and revenue figures, but I thought that by sharing Oz Weather’s data I might encourage some others to share also, and so perhaps help us all build up a true picture of the economics of building and selling iPhone applications.

I started developing the weather data collection back-end in June 2008, before I had any expectation of building an iPhone app. At that point, I was just experimenting/playing with a prototype web application displaying some useful world-wide weather data in a different and more-accessible way than is available elsewhere. I used PHP and MySQL and put together a basic website using Dreamweaver. I probably spent about 10 days worth of effort in putting this together. However, I’m not going to count that as part of my economic assessment, because it occurred prior to project commencement proper, and I would have done it anyway.

The first phase of the project proper was to build an iPhone web-app (the idea being to test the water before attempting a native app). To do so I invested AUD$1400 (US$1,000) to hire a designer plus AUD$100 (US$70) in miscellaneous other costs, and spent about two weeks of my own time to adapt the existing back-end to cope with detailed Australian specific weather data, and to fine tune the app to its release state. The result was a web app listed and endorsed by Apple as a “staff pick”.

The second phase was to build an equivalent native app. Although I toyed with the idea of out-sourcing the development, I decided that I really wanted to learn how to develop iPhone apps myself. Subsequently I spent about 30 days effort in bringing it to a releasable state. (I estimate that would have been maybe 20 days if I had not had to go through a steep learning experience with Objective-C, X-Code and OS-X to start with.)

For the first 14 days of sales, the total number of units sold was 1586, and averaged 140 units per day over the last 7 days. The daily sales are graphed below, for the period Nov 1 to Nov 15, 2008. Sales to Australian customers are shown in orange, and to overseas customers in yellow. 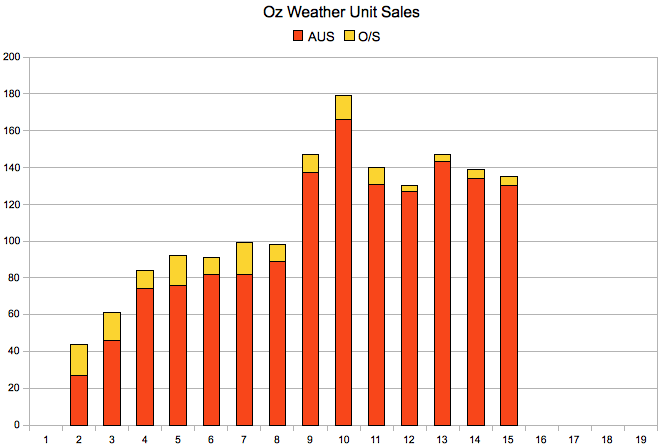 The initial web app was monetized by including AdMob advertising as a banner across the top of the page. In a previous post I mentioned that AdMob had started with an eCPM of about US$7, but shrank progressively to around US$1.20, which is roughly where it remains now. With about 26,500 cumulative ad requests so far, at an average fill rate of 77%, total advertising revenue amounts only to about AUD$50 (US$37).

This current weekly average rate of sales if it were to be maintained equates to AUD$6,700 (US$4,700) per month. That look like a good rate of return for the investment of AUD$15,500 (US$10,850), suggesting a break-even point at between two and three months.

However, I believe that the likelihood of maintaining the same rate of sales over an extended period of time is low. Here are a few reasons why.

No doubt other developers with app store experience will also have some thoughts on this… If so, please do leave a comment.

Of course I would be lying if I suggested that I wasn’t optimistic about doing much better than just breaking even with this app. But its early days yet, and I haven’t got a lot of other app data to compare with.

When looking at the bigger picture and applicability of these figures to other apps and other countries, the following points are probably also relevant.

I intend to report back from time to time to see which direction things are heading in as time goes on. And I also hope that some of you other iPhone developers out there will be willing to share your data (or at least their broad characteristics) too. That way we can all get a better idea about just what to expect before we actually start trying to implement our next big iPhone app ideas.

So… now I have a question for you. Have these figures put you off, or have they encouraged you to get started on your own iPhone app right away?